The 109th stated meeting of the Presbytery of the James was held virtually on October 16, 2021. Some of the leaders were graciously welcomed to Westminster Church, Richmond. Ginter Park Church served as a second site where leaders hosted portions of the meeting. Ruling Elder Dan Jordanger, vice moderator from Providence Gum Spring, called the meeting to order at 9:00 a.m. and led the presbytery in prayer.

The vice moderator explained that he was serving in this role because Teaching Elder Patrick Dennis had moved to San Antonio, TX where his wife Teaching Elder Sarah Dennis has accepted a call. Dan welcomed first-time ruling elder commissioners and guests.

Interim General Presbyter and Stated Clerk Fred Holbrook introduced ecumenical representative Rev. Daniel Mensah-Awuah, a student in the Master of Arts in Christian Education program at Union Presbyterian Seminary. Daniel is a pastor in the Evangelical Presbyterian Church, Ghana. Rev. Warren Lesane, Jr., Synod of the Mid-Atlantic Executive and Stated Clerk, was welcomed as a corresponding member from the Presbytery of Charlotte. Both pastors were granted voice but not vote at this meeting.

Some of the highlights of the meeting included:

Teaching Elder Karen Witt, pastor of Providence Gum Spring and moderator of the Examinations Committee, welcomed new ministers to the presbytery who each shared a brief word:

Rev. Gordon Lindsey, moderator of the Commission on Ministry, recognized ministers serving in temporary pastoral positions (covenant pastors) and offered prayer for them.

Rev. Hendricks, vice moderator of the Mission Council, presented the agenda which was approved.

The business of the day was comprised of the following: 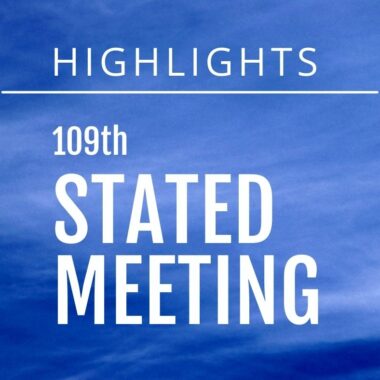 Moderator Jordanger declared the 109th stated meeting adjourned at 1:20 p.m. and led the presbytery in prayer.