The Synod of the Mid-Atlantic was created to oversee presbyteries in North Carolina, Virginia, Maryland, Delaware and the District of Columbia.

A transitional steering committee was appointed to begin laying the groundwork for the new presbytery that was to serve central Virginia, formed from the former Blue Ridge, Hanover and Southern Virginia presbyteries.

The steering committee asked members of the emerging Presbytery to consider that they were a "merger of varied people of faith with different memories; moving forward into a new beginning and a new creation."

The name Presbytery of the James was chosen, calling attention to the James River flowing throughout the geographic area of the new Presbytery.

Presbytery of the James officially came into existence July 1, 1989. The Rev. Dr. William S. Morris was the first executive presbyter/stated clerk. The first meeting was July 11 at First Presbyterian Church in Richmond.

The presbytery built an office on U.S. Route 1 on land owned by the former Hanover Presbytery.

In the mid-1990s, the presbytery first began grouping member churches into districts. These groups were based upon geography to cultivate close relationships and shared ministry opportunities.

A strategic plan detailing specific goals was created for completion between 1999-2001.

In 2006, the presbytery voted to sell the property on Route 1 in Henrico County. In October 2007, the office relocated to 3218 Chamberlayne Avenue in Richmond, adjacent to Union Presbyterian Seminary.

After two decades at the presbytery, Rev. Carson Rhyne retired in November 2018.

During the interim call of Fred Holbrook, God called Presbytery of the James to do a new thing. In 2021, the presbytery approved a new strategic vision including leadership by three presbyters who are sent out to meet our people where they serve.

In June 2022, Rev. Flo Barbee-Watkins assumed the role of lead presbyter. Leigh Anne Ring joined as presbytery for relational care in August 2022 and Barbara Chalfant as presbyter for congregational life in September 2022. 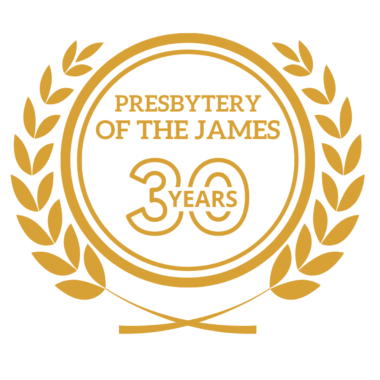