The called meeting of the Presbytery of the James was hosted virtually by Ginter Park Church in Richmond and Tuckahoe Church in Richmond. Ruling Elder Leigh Anne Ring (Salisbury), moderator, called the meeting to order at 9:30 a.m. and led the presbytery in prayer.

Some of the highlights of the meeting included:

Moderator Ring led the presbytery in a morning meditation. Praise music was offered by Doug Brown and the Union Presbyterian Seminary choir.

The agenda was approved. The business of the day was comprised of the following:

Having completed the business of the called meeting, Moderator Ring reminded commissioners of the stated meeting of the POJ on February 20, 2021. The first meeting of 2021 was to be hosted by Second Church Richmond but it will be held virtually. She declared the meeting adjourned at 1:15 p.m. and led the presbytery in prayer. 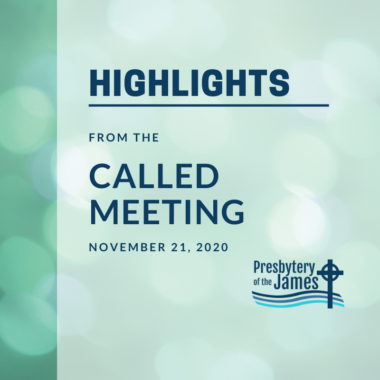