“We interrupt this broadcast with special breaking news. Reports have been coming in from the garden tomb where Jesus of Nazareth was buried. We go now live to the scene with our field reporter, Anderson Scooper. Anderson?”

Panning the garden, the camera stops on Anderson atop the open tomb. Looking into the darkness, he appears disappointed. “Sorry, Wolf, but there is no story here. The tomb is empty. Back to you.”

That’s one approach which has definitely had a following down through the generations since that first Easter morning.

Spread by those who didn’t want to believe, some continue to say a quiet mob rolled the stone away, stole Jesus’ body, and started false stories of his appearing to people. Even in 2022, some believe Jesus’ dead body was stolen. These folks don’t have a clue why you join others in claiming Easter as the highest and holiest of days. They don’t know why the church continues to believe in a silly myth.

That’s one approach. The other approach is the great breaking news that Jesus really IS alive.

“We interrupt this broadcast with special breaking news. Reports have been coming in from the garden tomb where Jesus of Nazareth was buried. We go now live to the scene with our field reporter, Mary Magdalene. Mary?”

Before the camera crew can finish panning the garden, Mary begins breathlessly speaking, “Wolf, you wouldn’t believe it! What I’m about to tell you is true! I’ve seen it with my own eyes. The tomb is empty! The soldiers standing guard won’t say anything. It’s like they are frozen in shock.

"It seems that, just at daybreak, when the sun was beginning to light the sky, two angels came and rolled the huge stone away. Then, when we got here and went inside, the tomb was empty! The cloth we had used to wrap his body was right where we had left it and the turban cloth we had used on his head was folded and laying off to the side.

"It is amazing, Wolf, absolutely amazing! The angels were suddenly inside the tomb with us and asking, ‘Why are you looking for the living among the dead? He has risen.’”

“Mary, is it true or have they just stolen his body?”

“Wolf, I don’t know. I haven’t seen him yet. But this is the most fantastic story I have ever covered. You talk about breaking news! This place is going to be humming with reporters as soon as the word spreads…. Just a moment, Wolf. I see someone coming…. Excuse me, Sir, but have you seen the body of Jesus? Do you know where they took it?”

Off camera, you hear the stranger’s calm voice, “Mary. Mary.”

“Wolf! Oh my goodness! This is Mary Magdalene. I’ve got to go. You won’t believe who’s speaking to me.”

As the camera fades, you hear Mary cry out, “Teacher? Rabboni? Is it...is it really you?”

One approach leaves Jesus as a historical figure who died, was buried, whose body was stolen, reburied, and who is still dead. The other approach has Jesus rising from the grave, fully alive, even to this very day. Which do you believe?

I trust that you, my friends within the Presbytery of the James, believe the breaking news from the garden. You believe Jesus is risen, that he is alive. You believe it and you thank God for the new life you have because of him.

Satan thought he had won. On Good Friday, when Christ’s broken body was disengaged from the cross and he was sealed in a stone cold tomb, Satan figured he had won. I can only imagine the smirk on his face.

There used to be a painting in the Louvre Museum called “Checkmate”. Painted by Friedrich Moritz August Retzsch, it depicts Dr. Faust playing chess against Satan. If Satan wins the match, he gets Faust’s soul. Faust looks distressed and Satan is grinning with delight. 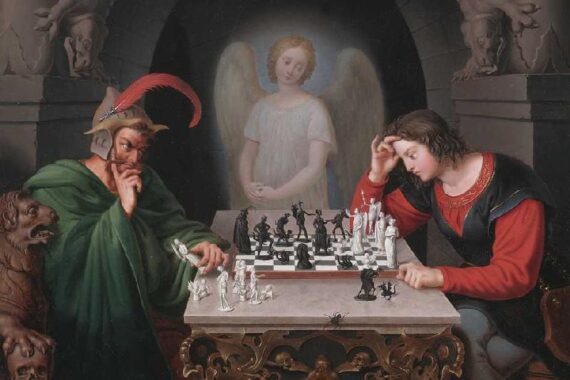 A world chess champion visited the museum. He studied the painting for hours. Satan’s arrogance, Faust’s hopelessness and fear.

Suddenly the master chess player exclaimed: “Wait! It isn’t over. It is not ‘Checkmate.’ The King has one more move.”

It makes me think that, all Friday night and Saturday, as Jesus was in the tomb, Satan smirked with arrogant delight. He was certain he had won. But on Easter morning, the shout rang throughout heaven and earth, “Wait! It isn’t over. The King of glory has one more move.”

Indeed, Jesus did! That is the breaking news. He is alive. He is! Right now, in your heart and mine, Jesus is alive! This is breaking news. It breaks sin and restores love. Thanks be to God!

Have a blessed Easter, my dear friends! 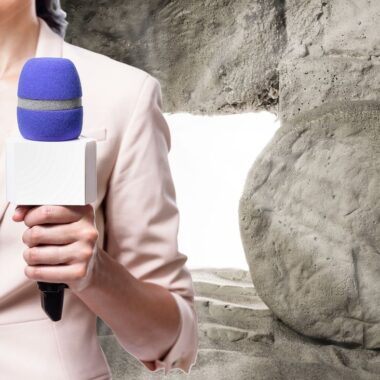